Our scheduled review and reviewer couldn’t make it today, so you get me again.

So, yeah, I’m may be late to the Kristen Ashley club, but boy, I have arrived. I’d heard her name and good things about her stories but never picked one up. Most of what I’d heard rumblings about was her Motorcycle Man books, and to be honest, that only slightly intrigued me. For no particular reason, really, other than I’ve simply never read any motorcycle club books or even watched Sons of Anarchy (although I have listened and grinned at J spouting all things Charlie Hunnan). But then, Ashley’s new Chaos series novel, Own the Wind, went on sale, and I do love a sale on a reputed good book, so I went and checked it out.

You all know how I love a well-written bad boy alpha hero with a heart of gold. Yep, sold. And swoon.

And, oh, Shy was. Swoony and alpha bad boy in all the good ways and a big old heart who loved his woman, no ifs, ands, or buts about it. Yep, I got the starry eyes over him. And Tab was a great strong heroine who stayed true to herself while working to accept growing up and everything Shy was without wanting to change him. I love that, too.

Ashley has a unique writing style that took a little getting used to, but I fell right into the characters and story. The change in POV, and going from first to third in those changes, did throw me a little, but she didn’t use that often and while the technique did pull me out a bit, nothing that really bothered me. Also the time skipping ahead, the chapter and section breaks starting with “Three months later…” “Six Weeks later…” Wish that could have been smoother, but overall, very minor pulls out of the story and the story and characters were well worth the read.

I enjoyed the way Ashley handled the character growth while keeping true to their personalities and who they were at the core. A refreshing change from many romance plots, where often the alpha hero tuns into a whipped pile of whatev to prove he loves the heroine, or she becomes a doormat because he’s so hot. Both Shy and Tab did things they came to realize were mistakes, accepted their own failings as well as the others’, dealt with them, and moved on. Ashley is able to show you both sides of a situation, put you right in a character’s head and make you feel  their thoughts and actions are the right ones, then make you see the errors of their ways right along with that character, see both sides, balance and deal with them, and then move forward right along with the hero and heroine.

I also really liked the way she handled the “outing” of Tab and Shy’s relationship. They tried to keep their burgeoning feelings quiet to settle in and be comfortable themselves first, but when they are inevitably found out, instead of groveling for everyone’s forgiveness, Ashley had them handle it head on, stand up for themselves, point out how it’s no one’s business who they sleep with, they have no obligation to tell everyone who they’re sleeping with, and it’s no one’s place to make judgements about what they choose to make common knowledge about who they’re sleeping with. Bravo! So refreshing and yay! And even better, Ashley addresses both sides, showing how their friends and family could still be upset- and make that sound reasonable, too – that they felt they should hide their relationship for any other reason that those Tab gets into their shit about. I was cheering the whole way through that scene. I love getting pulled in and taking a side of one character, only to have the author skillfully show the other side, and have you cheer for them, too, and then take in the entirety of the whole situation. I wish we all had that ability in real life, and I don’t just mean writing about it.

So, yeah. I loved Own the Wind and will definitely by the next in the series, Fire Inside, and then go buy the precursor, the Dream Man series. 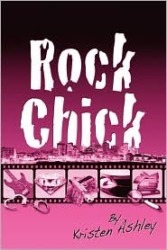 What I did buy after finishing was another Kristen Ashley book that was on sale, Rock Chick. I liked this one, too. Reminded me of Janet Evanovich’s Stephanie Plum series, but better, and Linda Howard’s To Die For. Light, silly, sexy, and fun. Ashley gives great bad boy alpha heroes. I’ll definitely continue on with this series. Each features different characters but includes old favorites, and they sound just as sexy-heroed and fun as the first.

And then. Looking through more of Ashley’s back list, what do I see? A series of anti-heroes? Be still my heart. I mean, I love a well-written bad boy alpha hero, but a bad boy alpha anti-hero? My excitement and joy knew no bounds. So, I bought Knight, and oh yeah. Very nicely done. Sexy and uncomfortable and wow and amazing and holy shit all in one. Not for the faint of heart, but if that’s your kink like it is mine, you’re in for a ride. I’m still a hot mess and conflicted and loving it all at once.

Ashley shows great versatility in her ability to go from a tough guy motorcycle club, a light hearted comedic romp, and a darkish erotica, although her heroes have a strong common thread of that bad boy dangerous alpha. Her unique writing style quirks and dialog style remain a little too similar throughout the 3 1/2 books I’ve read so far despite the vastly different sub-genres. That hasn’t really bothered me too much yet as it is different, fun, and sexy, but we’ll see as I read more into her backlist.

With more than twenty books in her backlist, I think you’ll find one that intrigues and I definitely recommend giving her books a shot if you haven’t already. If you have, give J and I your thoughts on what you’ve read and what you’d recommend a latecomer to the Kristen Ashely fanclub.

Kristen Ashley was born in Gary, Indiana, USA and nearly killed her mother and herself making it into the world, seeing as she had the umbilical cord wrapped around her neck (already attempting to accessorise and she hadn’t taken her first breath!). Her mother said they took Kristen away, put her Mom back in her room, her mother looked out the window, and Gary was on fire (Dr. King had been assassinated four days before). Kristen’s Mom remembered thinking it was the end of the world. Quite the dramatic beginning.

Kristen grew up in Brownsburg, Indiana and has lived in Denver, Colorado and the West Country of England. Thus, she’s blessed to have friends and family around the globe. Her family was (is) loopy (to say the least) but loopy is good when you want to write. They all lived together on a very small farm in a small farm town in the heartland. She grew up with Glenn Miller, The Everly Brothers, REO Speedwagon and Whitesnake (and the wardrobes that matched).

Needless to say, growing up in a house full of music, clothes and love was a good way to grow up.

And as she keeps growing, it keeps getting better.

After being rationed books by my parents like most kids get rationed candy, I turned to writing to tide me over between fixes. Having lived in the suburbs of the Mid-West, desert of the Southwest, and foothills of the Rocky Mountains, I'm now living on an island in the Puget Sound with my husband and dogs.
View all posts by melissafoxwords →

One thought on “J to tha M Review: What M’s Been Reading”

Leave a Reply to J to tha M Review: What M’s Been Reading | melissafoxwords Cancel reply